Last year, weeks before her death, Ray J and Whitney Houston began hooking up again and rumors swirled that they had rekindled their relationship.

Yesterday, on the one year anniversary of Whitney Houston’s death Ray J finds it hard to deal with her passing and heads to New Jersey to visit her grave site. 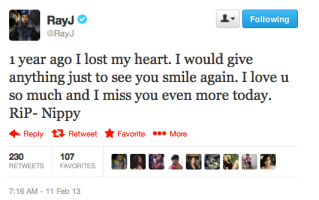