Eve recently hosted an ‘Intimate Hour’ with a group of high school girls in her hometown of Philly and she revealed her journey of  self-discovery.  She revealed a little information on Stevie J being her “first love” and being a different woman now, then she was when her and Stevie was together.  Who could forget the sex tape that “leaked out?”

On how she defines the ‘love’ between her and Stevie back then You know what…that was a learning  experience. You meet people all the time. We just happen to fall in love. Umm,  but thankfully I knew better, I know better, I am happily in love now. And the  girl now (referring to herself) he couldn’t even see this. I would be like, “I’m sorry, we don’t speak the same language!” But you  know, it is what it is….that’s life.  Sometimes you meet people who aren’t great for you but thankfully I am in a  different place.

On things she would not put up with now that she is older and knows  better When I was younger I didn’t question things but now I am  annoying! Like if something doesn’t feel right speak up! If you feel like you  are being lied to speak up! If you feel like Sexually he is trying to push you  to fast speak up. And let me tell you something. Anybody that knows your worth  it will stick around. They might not talk to you about it, they may talk to you  about it but if they argue with you or if they call you a name or if they roll  out they are not meant to be in your life anyways….

There is no shortage of stars on 2 Chainz’ Def Jam debut Based on a T.R.U. Story.  Due August 14, the 17-track deluxe edition includes appearances from Nicki Minaj, Chris Brown, Lil Wayne, The-Dream, John Legend, Mike Posner, and his fellow Playaz Circle member Dolla Boy, with production by Mike Will, Hit-Boy, Drumma Boy, Lex Luger, and more.  The album has already spawned the singles “No Lie” featuring Drake and the Kanye West-assisted “Birthday Song.”

The rapper formerly known as Tity Boi describes the project as “entertaining, classic, gritty, eargasm, conceptual.”  “This is my first album as 2 Chainz,” he told MTV News.  “I think I’m gonna be around. I don’t think it’s just gonna be a one and out thing with me, so this has to be a classic for me.”

Based on a T.R.U. Story Tracklisting

Atlanta rap group Outkast has been on hiatus since their 2003 Grammy Award winning album Speakerboxxx/The Love Below. Fans have been waiting for Andre 3000 and Big Boi to reunite on a track almost had it on Frank Ocean‘s “Pink Matter.” However, Andre 3000 wasn’t having that.

The less eccentric half of Outkast, Big Boi, recently spoke to Rap Radar‘s Elliott Wilson about being kept from appearing on Frank Ocean’s debut album. Big Boi says Andre 3000 blocked him from adding a verse to “Pink Matter” because he didn’t want Outkast’s reunion song to be on anyone else’s project. Apparently, this isn’t the first time 3 Stacks has shut Big Boi out of contributing a verse to a song. Big Boi tweeted that Andre 3000 was the cause for him not appearing on T.I.s upcoming album.

Rihanna has been living it up in the South of France doing everything imaginable, drinking, smoking, snorkeling, jet skiing and the list goes on.  She recently wrapped her trip and showed major love to the staff aboard her private yacht that she enjoyed with her closest friends, staff, and family. Now it’s back to work as she preps for the premiere of her UK “Styled To Rock” fashion reality show and very likely a new album within the next year.

Beyonce recently updated her tumblr page to include her reppin’ her husband in a major way as she always do!!  The mega star also revealed via her website beyonce.com, that August 19th she wants her fans to “Leave their footprints.”  Who know what Bey has in store, but her #Beyhive is in full anticipation mode.  Check out her new photos:

Teyana Taylor was recently snapped recreating the infamous Rolling Stone cover that Janet Jackson did back in 1993 with her then husband, Rene Ellizondo.  Janet Jackson also used the photo for her cover art for her multi-platinum album janet. Lance Gross who took the photo, tweeted, I turned my camera on @teyanataylor #theremake. 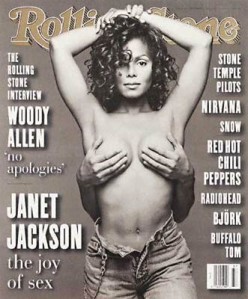 Jada Pinkett Smith proves that some women just get better with age.  Jada tweeted a pic of herself in a teeny-weeny bikini, while soaking up the sun while on vacation: