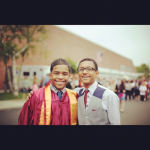 Justin Combs spent the weekend celebrating his high school graduation his father Diddy, and mother Misa and plenty of friends & family.  There was a bit of controversy regarding Justin’s full scholarship to UCLA, mainly due to the fact Mr. P. Diddy is a very wealthy man, and does not necessarily need it for monetary reasons.  UCLA fired back stating:

“There’s a misconception out there that somehow athletic scholarship would take away money from low-income students who need need-based aid,” school spokesman Ricardo Vazquez said. “That’s not the case.  Athletic  scholarships are awarded strictly on the basis of athletic and academic ability.”

And Justin, who graduated with a 3.7 GPA from a top private school and won several football awards and made the prestigious All Star/All American team this year, tweeted last night:

“Regardless what the circumstances are, I put that work in!!!! PERIOD. Regardless of what you do in life every1 is gonna have their own opinion. Stay focused, keep that tunnel vision & never 4get why u started.”

A former high school football star who was wrongfully accused of rape and imprisoned for six years and monitored for another four will now get his long-awaited shot at the NFL. Long Beach Poly High School grad Brian Banks is slated to audition for a number of teams, including the Seattle Seahawks, Washington Redskins, Kansas City Chiefs, and Miami Dolphins. The player, who had been offered a scholarship to USC at the time of the wrongful accusation, said he’s excited for what the future holds, and that his ‘mouth hurts from smiling so much.’ The player has been training nonstop since October, and told ESPN: ‘After all I’ve been through these last 10 years, I can still do some things that will impress you.’  Even if Banks’ NFL dream doesn’t come into fruition, the exonerated high school graduate has a job offer from the Arizona Diamondbacks.  Attorneys representing 26-year-old Banks said their client is entitled to $100 a day for every day of his incarceration under state law.

Banks was exonerated last week after his accuser, Wanetta Gibson, admitted she had made up the whole story of sexual assault ten years ago and had been reluctant to come forward because of a large settlement she received from the school district.

The Los Angeles Timeshas reported that Gibson also had been worried it would affect her relationship with her two children, now aged four and five.  Banks’ exoneration came after Gibson sent him a friend request on Facebook when he left prison in February of 2011 with a tag. In a message, she explained she wanted to ‘let bygones be bygones’.

Banks’s lawyer, Justin Brooks, told KPCCthat Gibson and Banks met and she was caught on video saying there there had been no kidnap and no rape, and would help him clear his record.  Yet she refused to repeat the story to prosecutors as she feared she would have to return a $1.5million payment she won after her mother brought a suit against Long Beach Schools.  She was quoted as telling Banks: ‘I will go through with helping you but it’s like at the same all that money they gave us, I mean gave me, I don’t want to have to pay it back.’

The 26-year-old has said he does not plan to pursue legal action against his accuser, and Los Angeles prosecutors have said it is unlikely Gibson will be charged with making false accusations, saying it would be a tough case to prove.Banks was jailed after Gibson accused him of rape in 2002, when he was just 16 and being heavily recruited by a number of colleges, including USC, which had offered him a full scholarship.  He was on the way to the school office to talk about his college applications when he bumped into Gibson, a fellow student, and they went to a stairwell to make out, Brooks told KPCC. He pointed out that they did not have intercourse.  He explained that Banks said something to upset Gibson and they parted on bad terms. She later accused him of kidnapping her, dragging her across the school and raping her in the stairwell.  Investigators tested her but found no physical evidence of rape, Brooks said. Banks maintained they had not had sex and all sexual contact had been consensual.

Yet his then lawyer encouraged the promising student to plead no contest to the kidnap and rape charges, warning Banks he could get 41 years to life in prison if convicted.  Expecting he would serve just 18 months instead, he followed the advice and pleaded no contest. He was in prison for six years.  While there, his case was taken on by Brooks, a lawyer who head the California Innocence Project.  ‘Brian’s story is so compelling, and his case for innocence so clear, we knew we had to take this on,’ said Justin Brooks. ‘Brian lost a huge part of his life when he was unjustly sent to prison.’

Brooks said Banks has remained on probation under electronic monitoring, has had to register as a sex offender and has had trouble getting a job.  After the exoneration on Thursday, Banks added: ‘My only dream in the world is just to be free… For years, I felt like a toy with the switch cut off, sitting on the shelf.’  Banks continues to train for what he hopes will be a future chance at a football career in the NFL.  ‘This is a kid who was a superstar,’ Brooks added. ‘He would be playing the NFL now if this hadn’t happened.’

Tyler Perry defends Bobbi Kristina and insists she NEVER walked off the set of his show.

I woke up this morning to my publicist calling me saying that there were reports that Bobbi Kristina walked off the set of “For Better Or Worse”. NOT TRUE AT ALL PEOPLE!!! There is no way that she could have walked off the set because we have finshed taping the season.

After Whitney’s funeral, Krissi and I spent a long time talking about her goals and dreams. She said she wanted to act. That’s when I decided to write her into “For Better Or Worse”. I thought that there would be no better way for me to help her move through the grieving than by giving her something to focus on. The one thing that I learned after my mother’s death is that you have to keep busy and you have to be around people who you can trust, so that when you do grieve you can do it in the safety and privacy of people that care.

Were there tough days for her? Yes of course. Not because of the actng or any job-related issues but because of the fact that she had just lost her mother. And being someone who knows about losing their mother, I know grief comes in different ways and you never know when it’s going to hit you or how it’s going to hit you, for that matter. Some days you’re smiling and happy and some days you’re so broken that you can’t stop crying. So yes she was grieving, but grief aside, she managed to finish her obligation and did a great job at the same time.

So please… PLEASE LEAVE THIS BABY ALONE!!!! AND SHE IS A BABY!!! Please stop the lies and give this child some room to breathe and grieve.

IF IT WAS YOUR CHILD WOULND’T YOU WANT THAT?

Allen Iverson and his estranged wife Tawanna’s messy divorce is getting messier. Allen just accused Tawanna of burglarizing his home and he wants her arrested.  Allen had been in Asia playing basketball and says he came home to an empty house courtesy of Tawnana. Furniture, art work, money, everything gone.

Last December Tawanna accused Allen of emptying their bank account and starving her and the kids, so maybe this his payback?  However, Allen has asked a judge to hold Tawanna in contempt for harassing him and to lock her up until she returns his stuff.

A ruling has not been made. 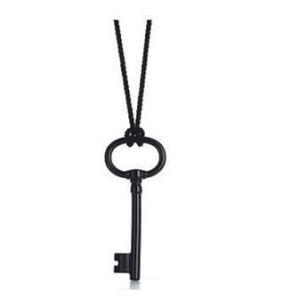 This Saturday June 2, 2012, your summer will be unlocked with “Ev’ryday Black: Keys to the Summer Celebration.” Haydee’s Lounge 6303 Georgia Ave, NW, Washington, DC.  Doors open at 8pm, with special guest performances by Buddha (Rapper/Poet) and  PotheFireman w/the Grand Champions (Rapper ensemble). Ev’ryday Black will start at 11pm-until, the club closes at 2 am. WE HAVE THE CLUB ALL NIGHT. Come join us as we celebrate Conga Player Art D’s Birthday and the GEMINI season!!!

Meagan Good had to let the haters know leave her alone.  After pictures surfaced of Meagan at her bachelorette party in Las Vegas doing a burlesque style routine, the internet went a blaze about Meagan marrying a pastor and she has no business in conducting herself that way….blah blah blah…so check out what she had to say about it….

“Let’s get something straight … I wasn’t half naked last night … I was actually very covered up, not showing anymore than I show when I dress up to go to events .,,and let’s get something else straight .. I’m an actress ., there will be many things narrow minded people deem unholy or not 1st lady like … But this is not so..it’s about your relationship with God and your personal convictions …

If you see footage,  you will see I was covered up having fun dancing and enjoying my self with my friends and family and absolutely not doing a striptease …smh people are ridiculous .. Can’t a girl enjoy her bachelorette party in peace?”

Big Sean added some sparkle to his smile thanks to Houston rapper and go-to grill maker Paul Wall.  The Detroit MC showed off his sparkly new accessory featuring a row of white and gold diamonds.  “Hey mom, no cavities,” tweeted Sean, who was nominated for Best New Artist at the 2012 BET Awards.  He will hit the stage at Hot 97 Summer Jam this weekend, and is readying his sophomore album for a September release.

Tami Roman stopped by the Wendy Williams Show and vowed to set a better example for women on Basketball Wives.  Tami told Wendy that she apologized to Kesha Nichols and that she promised her daughters she would never embarrass them on TV again.

Beyoncé’s shows in Atlantic City over the weekend brought out many celebrities, but none more famous than Michelle Obama and her daughters Sasha and Malia. During her appearance on “Good Morning America” on Tuesday, the First Lady bestowed praise on the pop superstar.

“Anybody who’s got talent, I’m all for,” Obama told Robin Roberts. “But Beyoncé has just been a tremendous supporter of ‘Let’s Move!’ Without asking, she reformulated [‘Get Me Bodied’] to do a flash mob for kids across this country.”

“Beyoncé stepped up in a way that so many of our celebrities and athletes are stepping up on behalf of this issue, so I love her to death and was glad to be out there moving my body with her,” said Obama.

Earlier this month, the First Lady told PEOPLE that if she wasn’t in the White House, she would be the “Love on Top” singer. “If I had some gift, I’d be Beyoncé,” she said. “I’d be some great singer.”

The feeling is mutual. In April, Beyoncé penned a handwritten letter to Obama on her website, thanking her for being a great role model. 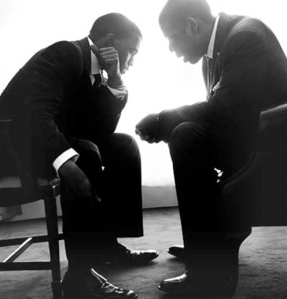 The revolution will be televised. Jay-Z and Kanye West take it to the front lines in the apocalyptic video for “No Church in the Wild,” the third single off Watch the Throne. The hip-hop duo does not appear in the Romain Gavras-directed clip, which was shot in Prague. The citizens rise up against the government, engaging in a violent battle that destroys the city. Watch them declare war.