Sylvester Stallone won his first ever Golden Globe and neglected to thank the two people who helped him get it.

During his thank you speech after winning the Golden Globe for Best Supporting Actor in a Motion Picture for his portrayal of Rocky Balboa in ‘Creed’, Sylvester Stallone neglected to thank his co-star Michael B. Jordan and the film’s director Ryan Coogler, instead thanking his own fictional character who he referred to as his imaginary friend. According to reports Stallone ran back on stage during the commercial break to correct the oversight, but actor Samuel L. Jackson and director Ava DuVernay had already done it for him on Twitter. 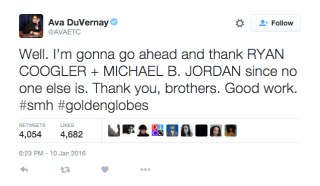