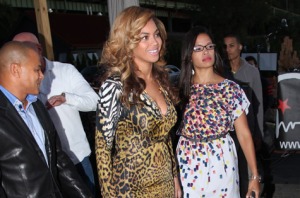 The web is running wild with rumors that Beyoncé may be pregnant with her second child after this photo surfaced over the weekend. At last night’s NBA 2K13 launch event, “E! News” went straight to the source, B’s hubby Jay-Z, to set the record straight.

When asked whether Blue Ivy will be getting a sibling in the near future, Jay responded, “No, not in nine months. Absolutely not.”