When you come across fresh and new talent you gotta expose it to other people!! Steeze Loueeze is bringing just that to the table;  something fresh and new for the world to rock with.  He coins his music as “feel good music” which I’m sure everyone can appreciate and relate to.  He ranks at # 9 on the Reverbnation charts for his hometown Lawton, Oklahoma and has been expanding his brand by having his mixtape on Dat Piff, and performing with the likes of Future and Big Sean.  Get into Steeze Loueeze below and follow his movement to the top:

Born in Oklahoma City, Steeze Loueeze has moved beyond the streets of his life. Signing with G Town Entertainment/Music, he has finished  his debut self-titled  EP in 2013. This EP has given birth to his current hit singles  “LiL Baby”, “Swag Heavy”,“We Over” and “We Ride”. On youtube his videos have combined views of  1,668,157. Steeze Loueeze is surely on his grind in becoming a force to be reckoned with. He has also released a mix tape that can be found on DatPiff.com titled “G’Nopoly” at http://www.datpiff.com/Steeze-Loueeze-G-nopoly-mixtape.512761.html

He has a current buzz and has performed throughout the country with multi platinum artist such Future, Big Sean, Young Dro, Kirko Bangs, 2 Chainz, Jezzy,  Juvenile and Roscoe Dash. G Town Entertainment/Music invested in his potential and will expand his music throughout the world.
CHECK OUT STEEZE NEW SINGLE “Put It In Your Mouth” 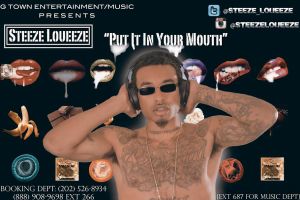 More Info on Steeze Loueeze can be found at: