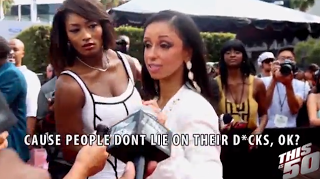 Back in 2006 50 Cent claimed he slept with Mya on a diss track aimed at rapper Game called “I’m Not Rich, I’m still Lying.”

Apparently Mya is still mad about it…

Mya has always maintained that 50 Cent was lying about sleeping with her and when comedian Jack Thriller tried to get a drop for Thisis50.com on the BET Awards red carpet Mya didn’t hold back how she felt.

After Jack asked for the drop, Mya cut him off with, “This is for 50 Cent? Oh. No. No. No. We can’t do that. He dissed me and I don’t support that.” Jack persisted trying to get the drop and told Mya 50 Cent was only bullsh*tting to which she replied, “He needs to say that to the public, cause people don’t lie on their dicks, ok?”