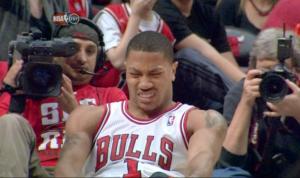 Derrick Rose crumbled to the floor, clutching his left knee. His season is over and the Chicago Bulls‘ title hopes might be finished too.

Rose will miss the rest of the season after tearing the anterior cruciate ligament in his knee late in Chicago’s 103-91 victory over the Philadelphia 76ers in Saturday’s playoff opener at Chicago, casting a big cloud over a team eyeing a championship run.

He scored 23 points and was playing more like the league’s reigning MVP after missing 27 games because of injuries during the regular season, but his season came to an end as the Bulls were wrapping up an impressive victory.