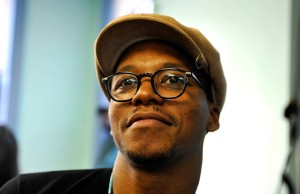 Rapper Lupe Fiasco is set to perform at the 2011 MTV Movie Awards with R&B singer Trey Songz for what is being billed as the first-ever televised performance of their collaboration “Out of My Head.”

Fiasco will also perform his single “The Show Goes On,” according to the Hollywood Reporter.  Both songs are from Fiasco’s album “Lasers.”

They are the first performers to be announced for the event, airing live June 5 from the Gibson Amphitheatre in Universal City.